The History and Founding of Warrior Tech 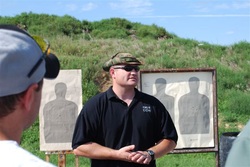 Warrior Tech was created by Lieutenant Tim Greenwood, with the goal of using his real-world experience to design and produce safety equipment for law enforcement officers that could benefit them in the field — and bring more of them home each night.
Tim served in the U.S.M.C. and U.S.M.C.R. from 1992 until 1998. His service included primary marksmanship instructor, recruiter aide, ECW Survival and supply. He was honorably discharged as a Sergeant. He joined the Hays, Kansas, Police Department in 1998 and has since served his community as a patrol lieutenant, firearms instructor, tactical team commander, Active Shooter Response instructor and reality-based training instructor. His project designs are the direct result of needs he recognized as an end user.
Tim and his wife Teresa founded Warrior Tech in February 2011. In August 2011, Tim filed for his first patent on the RPS, which would later become the Slingstock™. Since that time, he has partnered with companies such as RP Machining and WMD Guns to prototype and produce his designs to get them where they are needed most. He currently holds three utility patents on pieces of LEO safety and tactical gear, all in an effort to provide equipment for those who risk their lives for ours.
Warrior Tech is his dream. Without a partner like Teresa, a professional like Randy at RP Machining and the support of friends and family, this dream would never have been realized.
“Of every one hundred men, ten shouldn’t even be there.
Eighty are nothing but targets.
Nine are real fighters…  We are lucky to have
them; they make the battle!
AH but ONE.  One of them is a Warrior…
He will bring the others back.”
- attributed to Heraclitus, 500 B.C.